To use text from this article, visit “Marketing Resources for Your Website.” 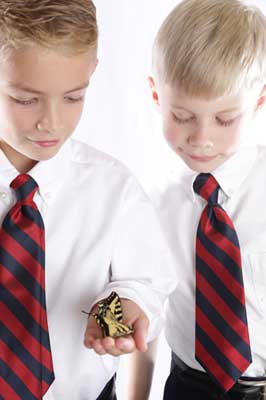 Public schools, charter schools, magnet schools, home schools, non-sectarian and religious private schools all have something to offer. Educational styles and methods range from the traditional to the progressive. How does your child learn? Does he enjoy art? Technology? Does he learn spatially, visually, or audibly? Finding the right fit can be a daunting task.

Classical Christian education is unique in that it seeks to faithfully restore the most proven form of education ever developed. This education produced the greatest thinkers, leaders, and scientists in the Western world from the time of the Greeks until the late 19th century, including America’s founding fathers. From the heritage of America’s Ivy League colleges and classical day schools, leaders in every field continue to emerge from the fragmented legacy of classical education. Unfortunately, its pure form, including a Christian worldview, has been lost until its revival in the early 1980′s.

What makes classical Christian education so effective? First, it is based on what has been called the Trivium. No matter how your child learns, he or she goes through three phases. In grades K-6, students are excellent at memorizing. In grades 7-8, students become more argument-oriented. They are ready to be taught logic and critical thinking. In grades 9-12, students become independent thinkers and communicators particularly concerned with their appearance to others. To this end, classical education teaches them rhetoric, the art of speaking, communicating, and writing.

Is classical Christian education still relevant? Yes, more now than ever. Our world is accelerating as technological, cultural, and geo-political forces reshape our daily lives. The subject matter and skills required in the market are evolving and changing rapidly. However, thinking, articulate people are always in demand. Those who are able to acquire new skills rapidly and independently are sought after regardless of the field. Classical Christian education has a proven track record of turning out these types of students.

Those who assume that methods used for millennia can be dismissed within a generation forget that time is the best laboratory, especially regarding human behavior.

It has taken modern educators only 50 years to disassemble an educational system that took thousands of years to refine and establish. The classical method was born in ancient Greece and Rome, and by the 16th century, it was used throughout the Western world. This system educated most of America’s founding fathers as well as the world’s philosophers, scientists and leaders between the 10th and 19th centuries. What other period can claim so many advances in science, philosophy, art, and literature?

For education to be effective, it must go beyond conveying fact. Truly effective education cultivates thinking and articulate students who are able to develop facts into arguments and convey those arguments clearly and persuasively. Parents from Seattle to Orlando are recognizing that classical education adds the dimension and breadth needed to develop students’ minds. Rigorous academic standards, a dedication to order and discipline, and a focus on key, lost subjects is fueling the rapid growth of the nation’s classical schools.

There is no greater task for education than to teach students how to learn. The influence of progressive teaching methods and the oversimplification of textbooks make it difficult for students to acquire the mental discipline that traditional instruction methods once cultivated. The classical method develops independent learning skills on the foundation of language, logic, and tangible fact. The classical difference is clear when students are taken beyond conventionally taught subjects and asked to apply their knowledge through logic and clear expression.

In 1947, Dorothy Sayers, a pioneer in the return to classical education, observed, “although we often succeed in teaching our pupils ‘subjects,’ we fail lamentably on the whole in teaching them how to think.” Beyond subject matter, classical education develops those skills that are essential in higher education and throughout life – independent scholarship, critical thinking, logical analysis, and a love for learning.

We hope you agree that this movement back to and beyond classical education develops timeless skills that are as important in today’s rapidly changing world as they were to our founding fathers.

A Love For Learning

Occasionally, parents who are interested in classical education express concern that it will be too difficult or too demanding for their children. Disciplining and challenging students is certainly part of the classical method. However, we believe that education is inherently enjoyable for children. The classical method is based on the philosophy that students should be encouraged to do what they naturally enjoy during particular phases of their life.

In Dorothy Sayers’ essay “The Lost Tools of Learning,” she promotes teaching in ways which complement children’s natural behavior. For example, young children in grammar school are very adept at memorizing. They enjoy repeating songs, rhymes, and chants to the extent that they often make up their own. In classical education, the “Grammar” phase corresponds with this tendency by focusing on the teaching of facts. During the junior high years, children often become prone to question and argue. Classical education leverages this tendency by teaching students how to argue well based on the facts they have learned. We call this the “Logic” phase. During the high school years, students’ interests shift from internal concerns to the external. Teenagers become concerned with how others perceive them. This stage fits well into the “Rhetoric” phase of classical education, where students are taught to convey their thoughts so that they are well received and understood by others. The education culminates with the debate and defense of a senior thesis.

The classical method not only cuts with the grain, but it develops a true sense of accomplishment in students. Many educators are artificially positive and soften grading scales in an effort to bolster their students’ self-esteem. We believe that a sense of self-worth comes from accomplishment. The student who excels after working hard achieves a greater sense of accomplishment than one who is given the grade. By holding students to an objective standard, they gain a true understanding of their abilities. Where self-esteem offers an artificial appreciation, classical education provides a realistic and true estimation of a child’s ability. Students who work hard to achieve a C based on accomplishment are more satisfied than a class of students who all receive A’s and B’s.

Finally, we believe that learning, hard work, and fun are not mutually exclusive. Learning should be a joyful endeavor – one that presents a challenge. A visit to our school quickly demonstrates the delight of students who love to learn. Learning is exciting, especially for children. In our experience, children who transfer from a conventional classroom to a classical classroom usually develop an increased appreciation for education and for the pursuit of knowledge.

Latin and the New Millennium

The most frequently questioned piece of classical education is its use of Latin. Why do students in the Information Age need something so arcane as Latin? Considering the number of quality schools that for centuries taught Latin as an integral part of any good academic training, the instruction in Latin should need no defense. However, like many traditions lost in the name of progressive” education, Latin’s advantages have been neglected and forgotten by recent generations. Latin was widely taught even in American high schools as late as the 1940′s. It was considered necessary to the fundamental understanding of English, the history and writings of Western Civilization, and the understanding of Romance languages.

Latin is a language that lives on today in almost all major Western languages, including English. Over 50 percent of English vocabulary comes from Latin. Training in Latin not only gives the student a better understanding of the roots of English vocabulary, it also lays the foundation for learning other Latin-based languages.

Learning the grammar of Latin reinforces the student’s understanding of the reasons for, and the use of, the parts of speech being taught in our traditional English classwork (e.g., plurals, nouns, verbs, prepositions, direct objects, tenses).

The “Christian” in Classical Education

Classically educated students will not distinguish between God’s creation and science; between God’s order and mathematics; or between Church history and world history. Throughout the curriculum, an inseparable association exists between subject-matter and spiritual matters. Today, this association is only possible through private Christian education, as government schools have become increasingly unable to present the complete picture, including the spiritual viewpoint.

Conventional education operates on the philosophy that education is neutral – that it merely conveys fact and that facts do not require a spiritual context. We believe that facts, whether scientific, mathematical, historical, or otherwise, can only represent truth if they are taught in the context of a Christian worldview. There is no neutrality. For this reason, we found our classical curriculum on biblical truth to provide an education that is pervasively Christian. The classical method’s Christian worldview is more than a Bible class. It shows the natural world and its history through the lens of God’s sovereign will and decree.

In the past 50 years, the academic study of Western Civilization has taken quite a turn. A fundamental belief of classical educators is that studying Western Civilization, with its triumphs and its failures, must be central to education. For the Christian, Western Civilization teaches us much about our origins and our theology. Our origins must be studied if we are to understand what makes us who we are and what factors will influence our future. Most theological matters have been decided within the backdrop of Western Civilization. Without a knowledge of our history, we are left to re-experience age-old heresies. From economic systems to mathematics to music, Western Civilization provides a rich context in which to build knowledge and wisdom. History offers us much if we will only make the effort to learn its lessons.

We are committed to the premise that students will work harder to meet a higher standard. A structured environment, including uniform dress, contributes to the order and discipline expected in the classroom.

♦ A Lasting Decision - Overview of Classical Education
Learn what classical education is, and why it's important.

♦ The Trivium
Understand the Trivium.